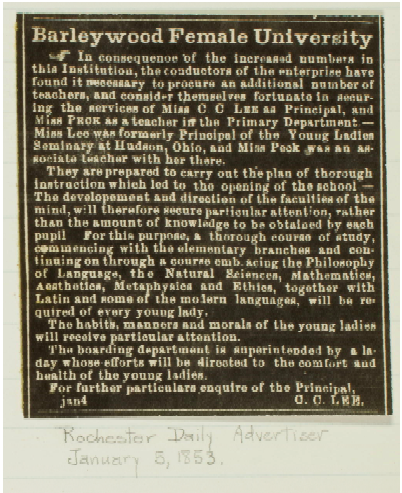 Convert your PDF to digital flipbook ↗

This four-page document is part of the records of the Board of Trustees of Barleywood Female University. Barleywood Female University was an attempt by a group of elite Rochestarians to found an institution of higher education for women around 1852-1853. Lewis Henry Morgan, a founding member, and his wife, Mary Elizabeth Steele Morgan, were among the organizers. Morgan was elected Secretary of the Board of Trustees and his wife was appointed to a committee to recruit Catharine Beecher and the American Women’s Educational Association to set up the school (Rochester Democrat, 7 June 1852).

Written in Morgan’s hand, the “Subscription for Scholarships” is a call for donations and a record of all those who had donated or had bought a subscription at $250 per student. Morgan calls for donations by first asserting that women deserve an education equal to the one men received. From his other works, including Ancient Society, it can be seen that Morgan saw the place of women in a society as a marker of a society’s stage of progress. In the “Subscription” he also noted that women had to pay twice as much for inferior education and that elite Rochestarians, by purchasing a subscription, could ensure that this did not happen at Barleywood.

Barleywood was ultimately unsuccessful. It is unclear what exactly happened and newspaper reports from the time draw a conflicting and confusing picture. In any case, Morgan’s attempts to advocate for women’s education were not over. He sat on the Board of Trustees of Wells College (a women’s college in Aurora, New York, Morgan’s childhood home) for over twenty years; and he willed his personal library and the bulk of his estate to the University of Rochester for the purpose of starting a women’s college there. Furthermore, his ideas about social evolution and women’s place in it were taken up by other scholars and activists such as Elizabeth Cady Stanton and Friedrich Engels in their pursuit of gender equality.